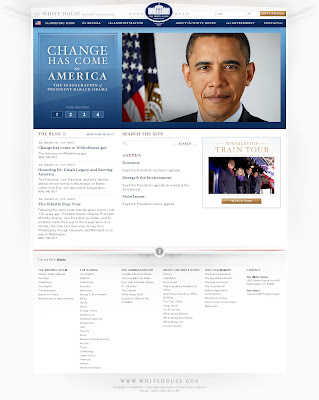 Change has come to WhiteHouse.gov

Welcome to the new WhiteHouse.gov. I'm Macon Phillips, the Director of New Media for the White House and one of the people who will be contributing to the blog.

A short time ago, Barack Obama was sworn in as the 44th president of the United States and his new administration officially came to life. One of the first changes is the White House's new website, which will serve as a place for the President and his administration to connect with the rest of the nation and the world.

Millions of Americans have powered President Obama's journey to the White House, many taking advantage of the internet to play a role in shaping our country's future. WhiteHouse.gov is just the beginning of the new administration's efforts to expand and deepen this online engagement.

Just like your new government, WhiteHouse.gov and the rest of the Administration's online programs will put citizens first. Our initial new media efforts will center around three priorities:

Communication -- Americans are eager for information about the state of the economy, national security and a host of other issues. This site will feature timely and in-depth content meant to keep everyone up-to-date and educated. Check out the briefing room, keep tabs on the blog (RSS feed) and take a moment to sign up for e-mail updates from the President and his administration so you can be sure to know about major announcements and decisions.

Transparency -- President Obama has committed to making his administration the most open and transparent in history, and WhiteHouse.gov will play a major role in delivering on that promise. The President's executive orders and proclamations will be published for everyone to review, and that’s just the beginning of our efforts to provide a window for all Americans into the business of the government. You can also learn about some of the senior leadership in the new administration and about the President’s policy priorities.

Participation -- President Obama started his career as a community organizer on the South Side of Chicago, where he saw firsthand what people can do when they come together for a common cause. Citizen participation will be a priority for the Administration, and the internet will play an important role in that. One significant addition to WhiteHouse.gov reflects a campaign promise from the President: we will publish all non-emergency legislation to the website for five days, and allow the public to review and comment before the President signs it.

We'd also like to hear from you -- what sort of things would you find valuable from WhiteHouse.gov? If you have an idea, use this form to let us know. Like the transition website and the campaign's before that, this online community will continue to be a work in progress as we develop new features and content for you. So thanks in advance for your patience and for your feedback.

Later today, we’ll put up the video and the full text of President Obama’s Inaugural Address. There will also be slideshows of the Inaugural events, the Obamas’ move into the White House, and President Obama’s first days in office.
Posted by The Khuc at 6:24 AM